At the beginning of May, in a picturesque and sunny Kołobrzeg, a symposium was held to commemorate the 15th anniversary of PRO-WAM’s Company situated in Koszalin. The main theme was focused on monitoring, optimizing and navigation in milk collection systems. The participants of the meeting were mainly representatives of the largest dairies in Poland and transport companies – a total number of about 300 people. The Agro Industries editorial team took over
the press patronage over the meeting.
All of Invited guests had the opportunity to take a look at the presentation
of a DEMO tanker with capacity. 17.600l on Scania chassis and the semi-trailer tanks of capacity of 26.000l.
The symposium began with a festive dinner during which the cabaret, invited
for the evening, performed its show. After the cabaret’s performance, guests had the opportunity to relax with live music till the morning. The second day was opened by the President of PRO-WAM’s company, mgr inż. Marek Las, and then led by dr hab. Zygmunt Zander.
Behind the scenes of the creation and operation of the PROMONT Production Plant was presented by Antoni Burzyński. Then, Oktawian Formela – Sales
and Development Director presented the wide offer of PRO-WAM Company.
The secrets of the driver’s work was lectured to the audience by Krzysztof Tchórzka (Head of Automation and Marketing Department) – with his presentation entitled “Monitoring of the driver’s work during the tour of the raw material purchase route”. Later, in the lecture – Mateusz Bonecki talked about – “Ways to optimize milk collection routes” proposed by Better Solutions Company. Ms. Wanda Charubin – head of SM MLEKPOL Collection Department in Grajewo described the “Practical side of raw material collection using the latest
PRO-WAM’S solutions”. The listeners got also acquainted with the membrane technologies presented by A-Lima Bis Sp. z o.o. – the lecture was led by dr inż. Janusz Kroll and the technology of sourdough dosing in the production of curd cheese and cheese was explained by the President of the Board of CSK Food Enrichment Poland Sp. z o.o. Piotr Zgórzyński. Professor dr hab.Jarosław Diakun -The head of the Department of Processes and Devices of Food Industry
of the Mechanical Faculty of Koszalin’s University of Technology gave a lecture entitled “”Strengthening the cleaning conditions in CIP system through the use
of atypical interactions”.
The didactic part was completed by the presentation of the MSc. Józef Nierychlewski pt. “Cow in the service of man and philatelic signs.” After a series of lectures, guests could freely exchange experiences and insights related
to the issue of collection and transport of milk. In the evening, during
the ceremonial banquet, the guests submitted to the board of PRO-WAM’s company congratulated on achievements and wished further development
and success. The star of the evening was a very famous Polish music band – MIG. 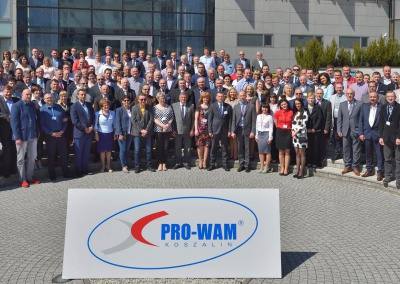 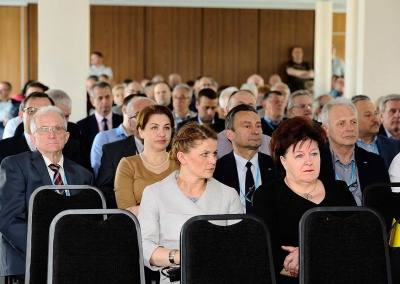 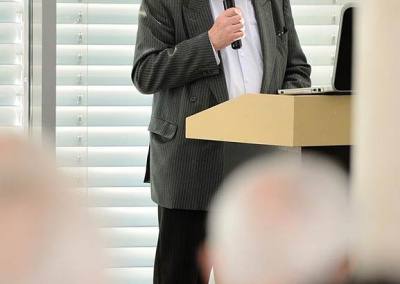 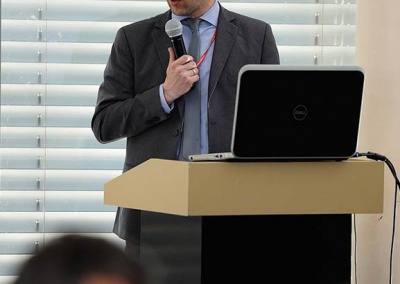